I rarely read Christian books written by Nigerian authors. This is not because I think Nigerian authors have nothing to say, but because good indigenous books—those that are faithful to Scripture and clear about the gospel—are very rare. As Nigerians we are well known for many things. Unfortunately, sound theology is not one of them. So imagine my surprise when I found two Nigerian authors on Thabiti Anyabwile’s list of diverse theologians to read in 2019. One of those was Femi B. Adeleye, and in May of 2020 I read his book: Preachers Of A Different Gospel: A Pilgrim’s Reflections On Contemporary Trends In Christianity.

Africa’s Preachers of a Different Gospel

Femi attempts to expose the peril of the prosperity gospel.

Femi was born in Nigeria, where he grew up. For over three decades he has been involved in student ministry with the International Fellowship of Evangelical Students (IFES). And he currently lives in Ghana with his family. His experience and exposure qualifies him to address this important topic.

Christianity Then And Today

In Preachers Of A Different Gospel, he urges his readers to consider the prevalent form of Christianity in the light of both Scripture and our own past. As a man who lived through much of the rapid decline in sound doctrine occurring in Nigeria over the past 40 years, Femi contrasts the popular Christianity of today with that of our past. 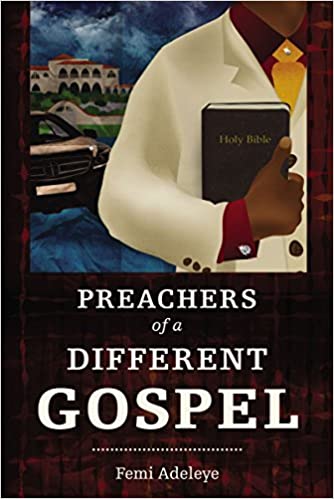 The Preachers of a Different Gospel: A Pilgrim's Reflections on Contemporary Trends in Christianity

The Preachers of a Different Gospel: A Pilgrim's Reflections on Contemporary Trends in Christianity

“Name it and claim it!” “Just have faith!” “Give and you will get!” Catchphrases like this have convinced many Christians that trusting in God will bring health and wealth. But the gospel does not promise prosperity without pain or salvation without sanctification. Femi Adeleye draws on his wide-ranging experience as he examines the appeal and peril of this new gospel of prosperity that has made deep inroads in Africa, as well as in the West.

Femi contrasts the popular Christianity of today with that of our past.

He writes, “Our goal was to be like Jesus in all our life. Through the ministry of the Fellowship of Christian Students (FCS) and later the Nigeria Fellowship of Evangelical Students (NIFES), we were well-schooled in the meaning of Christian commitment and discipleship. Now, you must realise those were the ancient days. These are modern days and things are quite different now. Really, really different” (p1-2).

Why did things get so bad? How did it happen so quickly? To answer those questions, Femi traces the root of the prosperity gospel to the “spontaneous revivals,” which broke out in the 1970s among students in secondary schools and university campuses. He identifies four marks of those revivals:

Thus the revivals weren’t all bad. He writes, “Not only did our meetings change, but so did our lives. There was a sense of purity. Things were really different” (p32). As a student at Ahmadu Bello University, between 1974 and 1976, Femi witnessed firsthand the difference that marked the lives of the students who were affected. The preachers of a different gospel—the prosperity gospel—would come later. For despite certain excesses, the revivals were about proclaiming Christ and pursuing zealous godliness.

Femi traces the root of the prosperity gospel to the ‘spontaneous revivals’.

But things changed. Mainline denomination soon embraced greater charismatic renewal, which was a separatist movement. And that wasn’t all. Femi also notes that “trends of accommodation of worldliness…emerged in the 1980s and contributed to the proliferation of prosperity preachers in the 1990s” (p34).

The emphasis slowly shifted from the four marks of the revivals in the 1970s as the movement diversified. According to Femi, the new movement of the 1980s and 1990s thrived because of “insufficient teaching and a loss of focus on the more fundamental aspects of the gospel” (p34). A great strength of Preachers Of A Different Gospel is Femi’s ability to combine careful evaluation of recent history and theological trends with his first hand experience.

Narrating his experiences across several well-known cities in Africa, Femi bemoans the irreverent worship and unholy lifestyle that accompanied the spread of the prosperity gospel in Africa. He identifies some of the leading figures in this movement in West Africa: the late Archbishop Benson Idahosa of Nigeria, Archbishop Duncan Williams of Ghana, and later Bishop David Oyedepo of Nigeria.

We Must Get Back To The Cross

Thankfully, Preachers Of A Different Gospel does not stop at diagnosing the problems with this strange gospel. He does his best to prescribe the true gospel as the antidote to the sickness the prosperity gospel brings. Thus Femi’s book doesn’t only criticise the prosperity gospel. He also pleads with his readers to return to the Bible if they are to understand the true gospel.

He pleads with his readers to return to the Bible.

Perhaps the greatest strength of Femi’s book is his wealth of experience. As a Nigerian, this experience resonates with my own. For I attended the Fellowship of Christian Students (FCS) throughout secondary school. I was also part of many revival meetings while at university. While reading the book, I found myself smiling as Femi describes what I had already experienced for myself.

The charismatic renewal which began in the 1970s is still very much in place in many Nigerian higher institutions. Today, the movement is fully marked by the prosperity gospel. I heard very few sermons that were clear on the gospel while in the university. But preachers usually used the work of Christ as a springboard. Via the gospel, they would introduce their own ideas, focused on physical and material prosperity. The cross was displayed, not as a means for sinful men to be reconciled with God, but as the way to enjoy a life of abundance here on earth.

An Appeal To African Christians

Throughout Preachers Of A Different Gospel Femi doesn’t write like an outsider. He writes like “one of us.” He writes for us. For African Christians. Many have written on this subject. But Femi’s book really comes home. For example, Femi scatters songs throughout his book. Songs are powerful indicators of what people believe. He demonstrates how the great songs that were previously popular gave way to newer and problematic ones. Doing this, Femi writes in captivating and vivid colours. He paints a picture that can’t be ignored. I thoroughly enjoyed his employment of songs in this book.

If I were to make a critique of the book, I would note Femi’s weakness in adequately critiquing the charismatic and prosperity gospel movement(s). For example, he states that “the charismatic renewal that began as a work of the Holy Spirit to renew the church and to impact the world with the gospel [was] hijacked” (p39). I wonder if the movement didn’t have its own issues from the very start. “Insufficient teaching,” as he describes elsewhere, and a faulty understanding of the true gospel, in my opinion, have arguably been the major characteristics of the movement from the very start. The decline of the “revivals” Femi describes probably began on day one.

Femi upholds a Christianity that is distinct from the world and has a clear impact on society.

In the end, Femi emphasises that the true gospel transforms men and women to serve God acceptably. He maintains that a holy life is a product of a true walk with God. He upholds a Christianity that is distinct from the world and has a clear impact on society. Thus I heartily recommend Preachers Of A Different Gospel to all Christians in Africa. This book, in my opinion, was written for them.

Eleazar Maduka currently serves as a pastoral intern at Trinity Baptist Church, Abuja, Nigeria, a church plant of Kabwata Baptist Church, Lusaka, Zambia. One of his greatest desires is to see Nigeria filled with biblical churches that are led by faithful elders. He enjoys reading and writing in his spare time. Eleazar maintains a personal blog, where he writes on issues that interest him.

1 Are Dreams and Visions Messages from God? // Africa Study Bible

2 You Were Created for Awe and Wonder, Don’t Waste It

3 In a World That’s Increasingly Grey, God is Good

5 The History of Christianity in Africa // Africa Study Bible

Three Warnings for Those Who Preach the Word

Can Christians Listen to Secular Music?

Does What You Believe Transform You? | 1 John 5