“Ministry should be supported, not sold” (p2). Very few Christians would argue with that statement. Many of us would cringe at the thought that gospel ministry would be exchanged for a fee. Yet, as Conley Owens argues in The Dorean Principle: A Biblical Response To The Commercialization of Christianity, much of today’s ministry fundraising practices aren’t based on what the Bible teaches.

Much of today’s ministry fundraising practices aren’t based on what the Bible teaches.

Judging from the title of the book, one may think that Owens book is a response to the ministry practices of flamboyant televangelists and prosperity preachers. But that isn’t the case. His intention is to capture a biblical ethic for all of ministry fundraising.

Owens distinguishes between two broad approaches to ministry fundraising: ministerial reciprocity and ministerial colabor. Colabor is a word coined from “co-labour,” to work together.

In contrast to this, ministerial colabor is what happens when support is given, not out of a sense of obligation to a minister or ministry, but to God. Instead of a direct obligation to the minister, ministerial colabor involves a mediated obligation. According to Owens, the minister “does not ultimately receive his pay from those to whom he ministers, even if he receives it at their hands. His just reward is granted by God through human means” (p30).

When people give out of a sense of duty to their minister they are paying for the ministry.

Practically, one way to recognise reciprocity is to ask: ‘Is payment demanded in exchange for ministry? Are there any financial restrictions placed on gospel ministry?’ If the answer to these questions is “yes,” then we are looking at reciprocity. On the other hand, colabor can be recognised when support (material or otherwise) is not the basis on which gospel ministry is given or withheld. 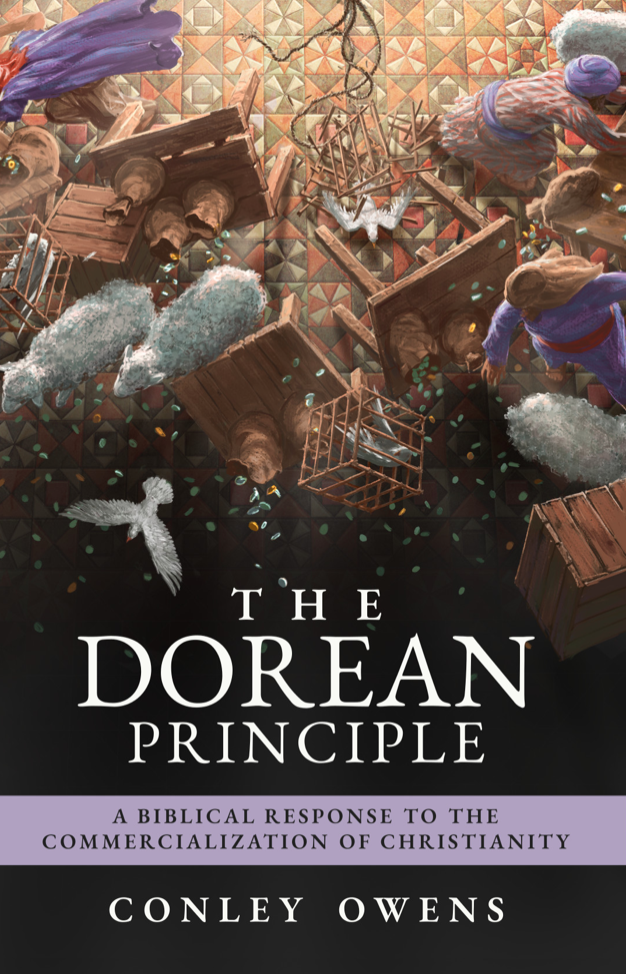 The Dorean Principle: A Biblical Response to the Commercialization of Christianity

The Dorean Principle: A Biblical Response to the Commercialization of Christianity

Many rightly condemn the wealth amassed by false teachers, but at a fundamental level, little differentiates their practices from those of legitimate ministries. Seminaries, Christian publishers, and other church and parachurch organisations all engage in the commerce of exchanging religious instruction for money. Now, more than ever, the church must turn to the word of God to find wisdom on these matters. The Dorean Principle offers a fresh look at the Bible’s guidance on ministry fundraising and exposes common practices that run afoul of its instruction.

The Dorean Principle in Jesus’ Teaching

Owens leans on the teachings of Jesus to argue for a unique different approach to many models of ministry support available today. He finds a dual ethic undergirding ministerial support in the instructions of our Lord to his disciples (Luke 10:7; Matthew 10:8-10).

On the one hand, Jesus commanded his disciples to “give without pay” (Matthew 10:8). Thus their ministry was not given in exchange for payment. On the other hand, Jesus affirms that “the labourer deserves his food” (Matthew 10:9; see 1 Timothy 5:18). They are to receive support while doing the work of gospel ministry. This tension is the basis for what Owens calls the Dorean Principle. The word dorean is the Greek word in Matthew 10:8, translated as ‘freely’ or ‘without pay.’

All support received in the course of ministry must come from an obligation to God.

So Owens argues that all support received in the course of ministry must come from an obligation to God, which is then given to the ministry.

In addition to Jesus’ teaching, Owens sees the Dorean Principle at play in Paul’s life and ministry. In fact, he devotes a large portion of this book to closely examine the ministry fundraising practices of Paul. Before demonstrating that Paul was guided by the Dorean Principle, Owens addresses what many see as an inconsistency in Paul’s practices:

However, Owens doesn’t see any inconsistency here. Firstly, Paul was willing to receive support that was offered as colabor, but not as payment. Secondly, his refusal to burden certain churches stemmed from the fact that those churches largely consisted of new converts, who were more likely to offer payment for the gospel. He was willing to accept gifts from firmly established churches, since those were clearly given as colabor and not payment.

Paul only accepted support when it was clear that it wasn’t given out of a direct obligation to him.

Owens argues that the apostle Paul didn’t arbitrarily choose when to receive support and when to reject it. He was being guided by the Dorean Principle. He only received support when it was clear that it wasn’t given out of a direct obligation to him.

Give out of an Obligation to God

Owens insists that a Christian minister ought not to require, request or receive support, unless it is within the context of colabor.

Congregations should be taught that they owe their giving to God, not their minister.

As Owens is quick to point out, the keyword is “exchange.” Ministry is exchanged when support is received as a direct obligation to the minister. Because of this, Owens advises that congregations should be taught that they owe their giving to God, not their minister. Quoting D. A. Carson, he writes, “the church does not pay its ministers; rather it provides them with resources so that they are able to serve freely” (p107).

Owens believes that a right understanding of giving will not only “correct an erring ethic, but it also has the power to enliven the giver” (p107).

The Dorean Principle Beyond the Local Church

Owens doesn’t restrict the Dorean Principle to ministers who serve in churches. He argues that it should be applied to all types of gospel ministry.

Owens defines gospel ministry as “any activity that proclaims the gospel or directly attends to its proclamation” (p105). Thus he argues that the Dorean Principle extends to all Christian instruction. The Dorean Principle regulates “teaching in many formats and contexts; from sermons to books…from Sunday school to seminary; it governs contexts both within and outside the regular operations of the church.”

Owens provides practical solutions to the challenges that arise when money and ministry meet.

For Owens, this includes parachurch organisations, Christian publishers, and seminaries. Furthermore, he believes that it is much easier for these kinds of ministries to violate the Dorean Principle. However, he doesn’t call on Christians to abandon these ministries. Rather he suggests alternative ways to prevent ministry from being offered in exchange for money. Local church involvement, for example, is crucial for the accountability of parachurch organisations and missionaries.

Owens doesn’t claim to have all the answers. But he wants his readers to respond proactively to the tacit dangers of parachurch ministry, by exploring how to generate support through colabor rather than reciprocity (p120). He tries his best to provide practical solutions to dealing with the challenges that arise at the crossroad where money and ministry meet.

A Call to Prayerful Inspection

One of the things I loved about this book was the author’s desire for the church to re-examine her relationship with money. While some of us are quick to condemn those false teachers amassing wealth, we are largely unaware of the ways we exchange ministry for money. Owens calls us to inspect our ministry fundraising practices in light of the Dorean Principle.

Owens is also not shy of putting his money where his mouth is. The Dorean Principle is offered for free as an ebook, and physical copies are also given for free upon request to those living in the United States. He tries to live by the principles he teaches.

We are largely unaware of the ways we exchange ministry for money.

This book is for pastors as much as it is for the church member who regularly gives to the work of the ministry. It is for all those who desire to see the Bible being obeyed as we respond to the difficulties that may arise at the intersection of ministry and money.

Eleazar Maduka currently serves as a pastoral intern at Trinity Baptist Church, Abuja, Nigeria, a church plant of Kabwata Baptist Church, Lusaka, Zambia. One of his greatest desires is to see Nigeria filled with biblical churches that are led by faithful elders. He enjoys reading and writing in his spare time. Eleazar maintains a personal blog, where he writes on issues that interest him.

3 How Should The Church Raise Money? Reforming Practices

In June 2021 the internationally acclaimed Nigerian born religious leader T. B. Joshua died. Here is a snapshot of the man behind the miracles.

How Good Is Your God? | Nothing Better Than Jesus