Many Christians, especially in the African context, struggle to understand the place of the devil in their lives. For some, the devil is a perfect excuse for dodging the consequences of their actions and sin.

What Role Does The Devil Really Play?

But over the years, African Christendom has found itself torn between two extremes. One extreme sees the devil’s hand in every bad thing that happens. For these, the emphasis of their Christianity is on exposing and fighting the devil and his demonic forces, or evil spirits. Their prayers, sermons, and even general conversations imply that Christians are locked in a permanent war with the devil.

The other extreme does not believe in the person and power of the devil at all. Is there a healthy balance between these two extremes? 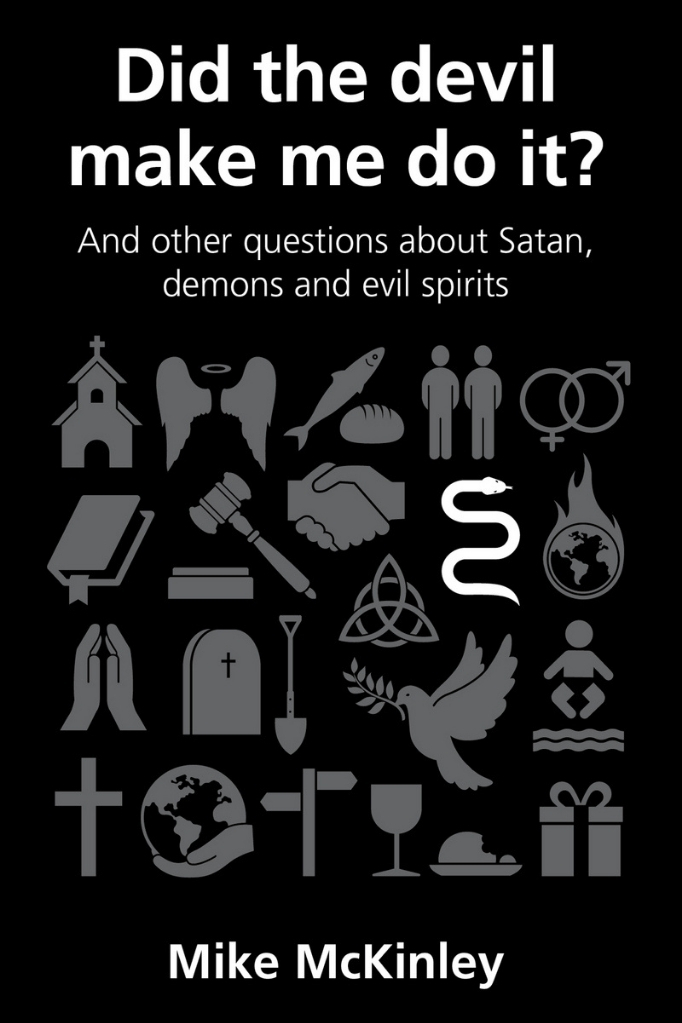 Did The Devil Make Me Do It?

Did The Devil Make Me Do It?

When Jesus walked the earth, he cast out demons and had powerful encounters with the devil. But who exactly is the devil, and where did he come from? And what is he up to in the world today?

This short, readable book explains clearly and simply what we can say with certainty from the Bible and Satan, demons and evil spirits.

Suitable for all Christians – especially those who are struggling with questions about Satan.

In Did The Devil Make Me Do It?, Mike McKinley helps us to navigate the above question. In order to accomplish this, McKinley presents a scripturally founded and logical argument that will provide readers with a clearer view of Satan and his schemes.

Biblical Truths About The Devil

This book offers a base for believers to work from in answering questions about the devil. As we will see below, McKinley draws out the implications of the rich biblical content in his book, to offer application and implications for the Christian life. Therefore this book is well rounded and worth owning.

Where Does Satan, Evil, And The Demonic Come From?

The first task of McKinley’s book is to show us the origins of the devil from scripture. He notes upfront, that the Bible may not answer all our questions concerning the origins of the devil. However, looking at Colossians 1:16 as well as Genesis 1:31, he concludes that God created Satan. And, like the rest of creation, Satan was therefore created good.

But Satan was part of the angels who rebelled against God (2 Peter 2:4; Jude 6; Genesis 3:1). Howsoever that rebellion unraveled, Satan now has authority in the realm of the demons (John 12:31).

Significantly, Jesus taught that Satan’s evil comes from within himself (John 8:44). There are at least two important implications of this observation. Firstly, Satan is a twisted part of God’s creation. Secondly, he is not equal to God but a rebellious creature seeking to steal the glory that belongs to God.

McKinley goes on to show that, “Satan is our enemy but not worthy of our fear or anxiety because Jesus has already dealt with him (Hebrews 2:14), now we are just waiting for his end to come” (p18). Believers are waiting for his final end to come because even though the devil was defeated he is still active.

What Does The Devil Do?

Satan and his demons are working to undo and prevent all of God’s work, if possible

How is the devil still active? What is the devil trying to accomplish? How does he work? Impressively, McKinley answers all of those questions in just a few words: “Satan and his demons are working to undo and prevent all of God’s work, if possible. He defaces though he can’t destroy, the image of God in human beings… In short, he seeks to rob God of the glory that he is due from his creation” (p23).

What this means for the believer is that we need not fear Satan. That being said, we must remain vigilant as Satan presently works to steal the glory due to God.

What Is Satan’s Relationship To God?

Of particular interest, is McKinley’s exploration of the relationship between God and Satan. McKinley writes, “If we want to understand the relationship between God and the devil, the place to begin is with this certain fact: the evil one is always, and in every way subservient to the will of God” (p25). A few pages later he says, “It is true that God does use Satan and his schemes to bless his people and accomplish his will… And so the ultimate way for believers to battle against the evil one is to resolve in our hearts and minds that we will trust God’s goodness and wisdom in all circumstances” (p33).

God’s sovereign authority over all that he has made should move us to trust God while also muting any fear of the devil.

Can Christians Be Possessed?

Another question McKinley tackles deserves special attention, particularly in the African context: can a Christian believer be possessed by a demon? Many have wrestled with this question.

In answering the question, McKinley helpfully distinguishes between demon possession and being influenced by a demon. According to him, demon possession is a term we might do better without, within the Christian circles. But terms like demonic influence and demonic attack can be very useful (p39). So he is basically arguing that when one has Christ in their heart, the devil can’t own or possess them. Yet demons may in some instances influence a Christian (Luke 22:3-6; Acts 5:3).

Applying the above point, McKinley writes, “We must reject the idea that a Christian can be possessed, controlled or dominated by a demon. Jesus has bound Satan and set God’s people free from his dominion (Matthew 12:29). There is no way for Satan to exercise that kind of authority and power over someone who has been bought by Jesus’ blood… Demons can tempt, influence, and attack God’s people, but to say that they possess a Christian doesn’t make sense of the biblical evidence” (p42-43).

Put simply, a Christian can’t be possessed by a demon but can only be tempted or influenced (1 Chronicles 21:1).

What About Exorcisms And Deliverance?

The next big question for any reader, especially African readers, would be: what about Christian exorcism? This question is, of course, closely related to deliverance ministries. McKinley responds to the question of Christian exorcism arguing that nowhere in Scripture are post-resurrection believers explicitly commanded to cast out demons. Rather, God instructs post-resurrection Christians to use spiritual gifts to discern demonic spiritual influence (1 Corinthians 12:10); exercise faith in God through prayer (Matthew 17:20); resist the devil (1 Peter 5:8-9); and spiritually arm and protect themselves against demonic or evil attacks (Ephesians 6:10-18).

Because Christians can’t be possessed by demons, they can’t be exorcised

Because Christians can’t be possessed by demons, they can’t be exorcised.

The Battle With Sin

Instead, Christians should actively wage a war against the evil influences of the devil. These influences exist mainly in the realm of thoughts and ideas, arguments and pretensions (2 Corinthians 10:3-5; Colossians 2:8). They also manifest themselves in sinful human behaviour.

But McKinley is quick to caution us with the words of 1 John 2:16. We must avoid the idea that sinful behaviour is always the result of such an influence. For much evil originates not in demons but in sinful human cravings (Mark 7:15). Here McKinley offers two important conclusions for Christians:

How Do We Arm Ourselves Against The Devil?

Therefore, as Christians we should soak ourselves in His Word, for by it we are able to wage war against all schemes of the devil (Ephesians 6:17). Furthermore, the Word of God is the only tool that is able to transform us into the image of his Son (Colossians 3:9-10). This is a particularly important point for many Christians to grasp, especially those in Africa.

We should soak ourselves in His Word, for by it we are able to wage war against all schemes of the devil

The Devil Didn’t Make Me Do It

In many pulpits the devil, demons, and evil spirits are considered the major cause of all sinful behaviour. Thus precious little is done to exhort Christians to take responsibility for their sin.

This is why exorcism is a major part of many Christian gatherings on the continent: exorcism is the go-to way to fight demonic influence. Yet in most cases, poor choices and ignorance of God’s Word has left Christians vulnerable to demonic influence. This in turn results in sinful behaviour that ultimately hurts and haunts the church.

Thus, McKinley’s conclusion is a timely challenge to many Christians who have found themselves struggling to understand how to deal with the devil as a Christian.

How Then Should We Live?

McKinley concludes his book by exploring how Christians ought to live in this world, in light of Satan’s very real and ongoing activity.

We live in a world where Satan has some authority, thus he is able to bring about temptations that incite our passions and stir unbelief. He seeks to deceive us with his lies and he aims attacks that will shake a believer’s trust in God. This may even be done through painful circumstances (p67-68).

We should live with our eyes fixed on Jesus Christ, who defeated the devil for us.

McKinley sums up his argument by calling on Christians to be alert to and aware of the devil and his motives. But he also cautions against being obsessed with the devil (1 Peter 5:8). For we need not tremble at his power or rage. Rather we should live with our eyes fixed on Jesus Christ, who defeated the devil for us. Let us meditate on this truth and others in God’s word.

Reflections For The African Continent

Did The Devil Make Me Do It? is a well balanced treatise of the subject of the devil and his place in the Christian worldview, together with his significance for personal faith.

McKinley’s work guides believers between the two extremes already mentioned: ignorance and obsession. Though this book is short it is also thorough. It is also delightfully accessible for the ordinary Christian. Through his faithful and insightful engagement with scripture, McKinley labours to show his readers how he got to his conclusions. Thus his book is not only outstanding but also informative. He casts a healthy and biblical light to expose the power of deception and how Satan can use that to undermine the Christian believer’s faith and his attempt to steal God’s glory.

A Dying Predator Can Still Inflict A Painful Wound

McKinley’s discussion on demon possession and demon influence, within the Christian circles, was particularly helpful. He puts everything in a healthy and biblical perspective.

Priviledge Tafirei has completed his Bachelor in Theology at George Whitefield College, Cape Town, South Africa and is now studying for his Honours. Prior to his studies he served with FOCUS Zimbabwe in student ministry at the Harare Polytechnical College, Harare. Priviledge is currently serving at St Barnabas Bible Church.

5 5 Ways to Love God with All Your Mind

Many Africans live in a world steeped in occult beliefs and practices that include generational curses. Yet we must remember that God’s power is superior.

Can a Christian be Cursed?

Run Your Race | Nothing Better than Jesus