“Kill it or it will kill you”. This is how a Xhosa friend describes the response of many black South Africans to snakes. On the other hand, some Xhosa and Zulu clans view snakes as a sacred animal, especially if they appear in a dream. Pythons are often kept as pets because it is believed they will bring wealth. At the same time, the Black Mamba is used in muthi to provide strength to the one who consumes it. Serpents—particularly snakes—also have a prominent role in the origin myths of many African countries and cultures. In the myths, these serpents are often humanity’s evil overlords and must be killed.

Why Are We Fascinated With Snakes?

What does the Bible say might lie behind our fascination with snakes? Andy Naselli’s brief yet insightful study, The Serpent And The Serpent Slayer, argues that the promise and fulfilment of Genesis 3:14-15 holds the answer. For it is not only the backstory to the Bible, but all of humanity. He summarises this backstory as, “Kill the Dragon, Get the Girl”. For Naselli, the Genesis narrative is the reason we enjoy serpent slaying stories.

The creation account is not only the backstory to the Bible, but all of humanity.

Naselli argues against Karen Joines and James Charlesworth, who make the case that the serpent was a predominantly positive symbol in the ancient world. Instead, he traces the predominantly negative use of the serpent to symbolise Satan—and his spiritual descendants—in the Bible. This begins with the Genesis 3 temptation narrative, which Naselli claims forms the basis of all subsequent appearances of serpent symbolism in the biblical writings. Therefore, in the biblical writings, all uses of the serpent are negative. 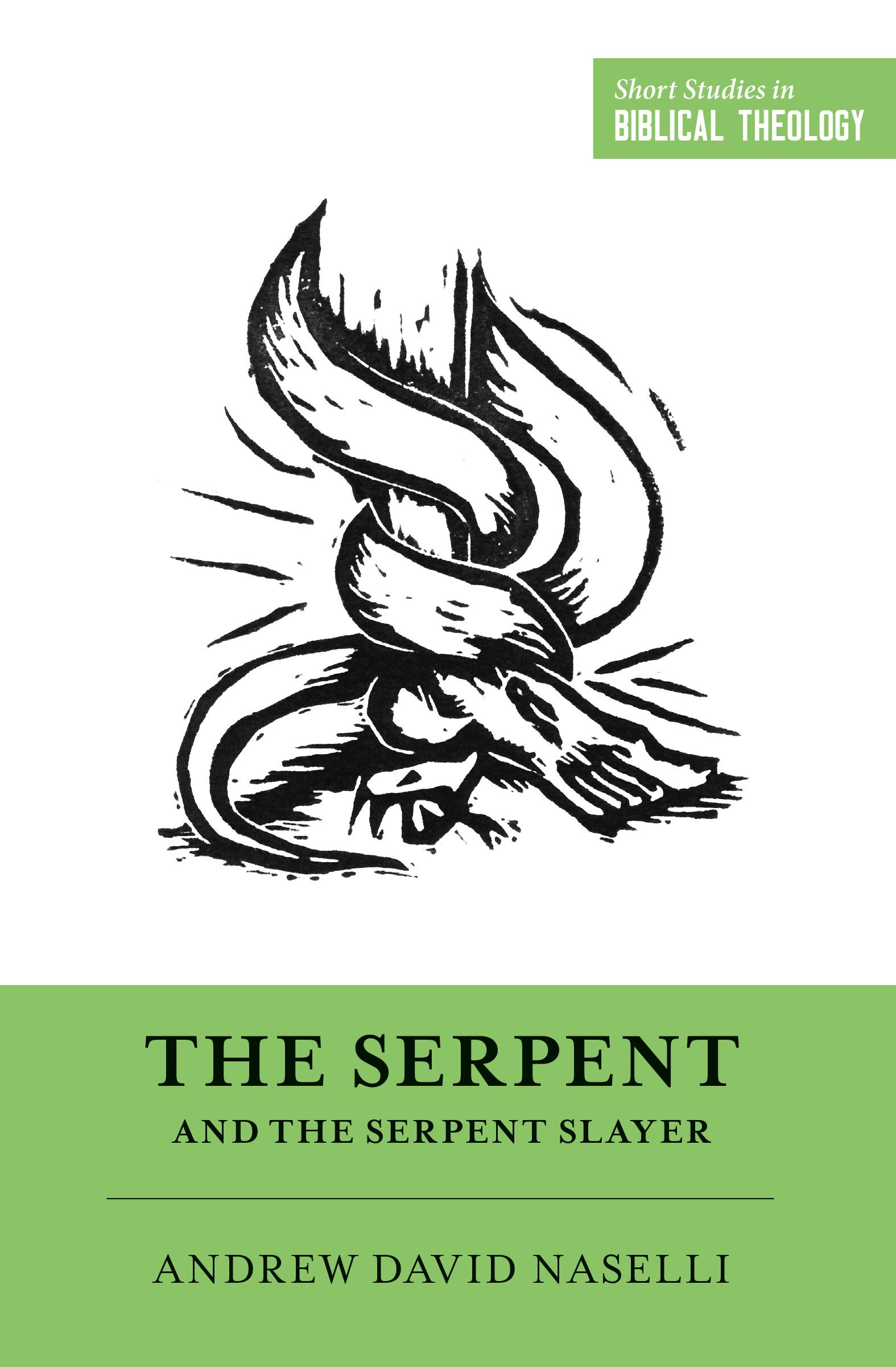 Tracing the theme of serpents and dragons through both Testaments, Naselli demonstrates that these stories reflect our desire to know the ultimate story—the struggle between God’s offspring and the offspring of the serpent. As we come to experience this captivating, unifying narrative, we will rejoice in the ultimate victory of Jesus—the serpent slayer—over the devouring dragon in Revelation.

The Serpent And The Serpent Slayer is divided into four chapters with an introduction and conclusion. The first chapter deals with how the serpent appears in Genesis 3 as the architect of the fall. Naselli argues for this incident being the foundational act of war against God and his creation, which sets up a grand narrative.

Here, Naselli also advocates for distinguishing between the two types of serpents in biblical writings: snakes and dragons. The distinction is based on the method by which Satan fights against God’s people: snakes deceive; dragons devour. In other words, the biblical authors use snakes when Satan intends to deceive God’s people (Genesis 3; Matthew 3:7; 12:34; 23:33; Luke 3:7; John 8:44) and dragons when he plans to destroy God’s people through violence (Daniel 7:23; Revelation 12:4). Naselli emphasises that Genesis 3:14-15 is the critical text that drives this conflict in the biblical narrative.

The fundamental conflict in the world is the war between God and Satan.

Humanity, specifically God’s people represented by a messianic figure—the seed of the woman (Genesis 3:15)—will crush the serpent’s head and its seed. That is, the Messiah will ultimately defeat Satan and his human allies, both corporately and individually. In contrast, the serpent and its seed will bruise the seed of the woman’s heel. He will inflict a painful but temporary injury. Therefore, the fundamental conflict in the world is not between nations like Russia, America, China, Israel or Iran. It is the war between God and Satan, waged through their human representatives.

Chapter 2: Satan and His Offspring

This chapter focuses on the serpent itself, symbolising Satan. The primary evidence presented for this identification is the use of Leviathan and Rahab, as well as other dragon figures. Naselli relies on the identification of Leviathan with Satan in each of these cases. If this is true, then Satan is at work all the way through the biblical storyline, instead of just popping up in Genesis, Job and the New Testament.

The Messiah will ultimately defeat Satan and his human allies.

However, here we find a weakness in Naselli’s work. For in many of the passages he cites, Satan and Leviathan are not explicitly connected. Furthermore, the only passage that makes this connection clear is Revelation 12, which Naselli must then use to interpret all of the Old Testament passages. This is not necessarily incorrect. But the argument would be stronger if he could prove:

Chapter 3: God’s People and Her Enemies

Chapter three argues that the seed of the serpent should be identified with human opponents of God and his people. Naselli highlights six categories of the serpent’s offspring:

Naselli begins by drawing a parallel between the serpent’s hatred of the woman’s offspring in Genesis 3, and Pharaoh’s edict to murder Israelite male babies in Exodus 1:8-22. This theme in which the serpent represents divine opponents is revisited in Matthew 2:16-18 (Herod), and again in Revelation 12:1-5 (the Dragon). Could it be that human beings are actually being used by Satan to oppose God and the Church?

Many times in the OT, a messianic figure literally ‘crushes’ the skulls of God’s enemies.

It’s difficult to prove a connection between Genesis 3 and Exodus 1. But seeing the pattern of hatred for male Israelite babies repeated in Matthew 2 and Revelation 12 strengthens Naselli’s case. In the rest of the chapter, Naselli relies on the evidence presented by Hamilton to show that many times in the Old Testament, a messianic Israelite figure literally “crushes” the skulls of God’s enemies. This theme is picked up again by Paul in Romans 16:19-20. Naselli shows that the “crushing” is done primarily by individuals but is then applied to all Christians by Paul.

Naselli then demonstrates that serpent language is frequently applied to the Pharisees and Sadducees in the four gospels by Jesus and John the Baptist. This theme continues for all false teachers in the New Testament. However, some of Paul’s comments do not reference snakes. Instead, Naselli relies on words like “deceit” or the theme of wolves infiltrating the sheep. These figures are deceitful and thus embody the serpent’s primary characteristic.

Perhaps the greatest weakness in this chapter is Naselli’s argument for how the bronze serpent incident from Numbers becomes used in John 3:15-16. Naselli claims that the serpent symbol is negative in the Numbers incident. In his view, the serpent portrays an Egyptian serpent god being nailed to a “battle standard,” which is a legitimate translation of the Hebrew in Numbers 21:9. The serpent bears the “curse” rightly meant for the Israelites.

Death itself is nailed on the pole.

However, this argument does not make sense. Why is Egypt or its serpent ‘god’ bearing the punishment meant for the Israelites? Perhaps it is better to read the story at face value: the snakes are what has caused death, and so it is a snake on the pole, a symbol of death. Thus it would be death itself that is nailed on the pole. This interpretation fits well with the later application to Jesus in John 3:14-16.

Chapter 4: Who are the Beasts in Revelation?

In the fourth chapter, Naselli focuses on Revelation, especially chapters 12 and 20. For these are the most substantial passages associating the serpent/dragon with Satan and his followers. Naselli’s argument is twofold. Firstly, he shows that John identifies the Dragon as Satan (Revelation 12:9). Secondly, he argues that the Beasts of Revelation represent these followers of Satan, both as individuals and empires. However, here the logic breaks down. The beasts are not exclusively or even explicitly snakes. They are in fact a mixture of wild animals. Naselli gives no clear evidence for why the wild animals are connected to the Dragon in John’s mind.

God Invites Us Into This Story

Naselli writes with a popular style aimed at the average Christian and so it is a fairly easy read. But this does not stop him from going into great depth and presenting good evidence for his theory. The greatest strength of his argument lies in the sheer number of passages that use and develop the theme from Genesis 3:15. The greatest weakness of the thesis is that it relies heavily on Revelation 12 to interpret much of the Old Testament evidence. A biblical theological method allows for this approach. Still, some may object that it comes close to “reading-in” meaning. However, this is a necessary contribution to the field which will help the Church understand the grand sweep of the biblical narrative.

This book will help the Church understand the grand sweep of the biblical narrative.

So, why do we love stories about snakes and serpents, dragons and beasts? They echo the greatest story embedded into the very fabric of our world. It’s a story about a Dragon (the devil), a girl and her children (God’s people) and a Dragon slayer (the Messiah). If you’re interested in a deeper understanding of the Bible, the world and yourself, then this is a very helpful as well as entertaining read.

Len Ritchie lives in Cape Town with his beautiful wife Christine and their cute daughter Riley. He serves at St Luke’s Church in Mitchell’s Plain as part of a team called REACH the Flats. Len is passionate about making disciples of Jesus who do the same, and he is currently busy with his Masters in Biblical Theology at George Whitefield College. He enjoys making music, investing in shares and property, reading widely, playing with puppets, and making a fool of himself in front of his wife and daughter.

5 5 Ways to Love God with All Your Mind

Can a Christian be Cursed?

When claims of witchcraft rush headlong towards us, we should rest knowing that no one can curse those whom God already blessed

Run Your Race | Nothing Better than Jesus