This is an excerpt from chapter 7 of Baesics: Run Hard After God. If Anyone Catches Up, Introduce Yourself by Ernest and Waturi Wamboye. Through personal stories, no-nonsense advice, and biblical exposition, Baesics urges you to commit yourself wholeheartedly to Christ, find your identity and purpose before you find a partner, and set appropriate sexual and emotional boundaries. It addresses the world’s myths about what makes one a man or a woman, how to handle temptations such as lust, and how to deal with emotional wounds.

It is not untrue to say that there is a male crisis in the 21st century. Many men do not know what makes them men. Is it our sexual reproductive organs? What identifies you as a man? Identity in a nutshell is the justification for your existence. If you cannot justify it, you will be in a crisis. Many men have their masculinity pegged on temporal circumstances.

Many men have their masculinity pegged on temporal circumstances.

If you study pop culture you will realise that the world is telling men that they are manly if they have three things. Or, in short, these three things are what the average man lives for:

I am going to call these three: girls, gold, and glory. Let me expound. These are the thoughts of a man whose identity rests in any of the three Gs. 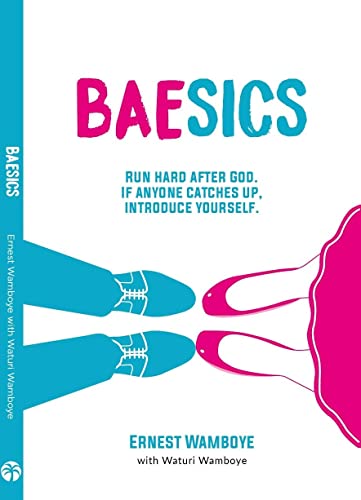 Baesics: Run Hard after God. If Anyone Catches Up, Introduce Yourself

Baesics: Run Hard after God. If Anyone Catches Up, Introduce Yourself

No-nonsense advice on how to build a fulfilling love life and marriage. Find your identity in Christ and become a real, godly man or woman. Learn how to set boundaries, resist lust, and heal from emotional wounds. Once you know the basics, you’ll be ready to meet your Bae.

The Three Gs of Contemporary Masculinity

Attaining and retaining female attention gives me admiration from other men. Women are sexual accessories to enhance my masculine image. When I am seen with women, I am perceived as manly.

Financial prosperity gives my masculinity freedom, security, power, and love. It grants me the attention of women and it also grants the inevitable envy of fellow men. I feel important because I have money. Without money I’m not manly enough.

Social dominance (fame, respect, titles, status, prestige, possessions, favour, popularity, leadership) gives my masculinity relevance and makes me the alpha male in the room. It is important that I stand out in public for something. If I can’t be seen as the guy with the sleekest car, I will be seen as the most humorous one in the room.

This narrative is not new and nobody in the modern 21st century should actually be shocked by this. You may not hear a man verbally articulate those positions on girls, gold, and glory. But you will see it manifested in his behaviour.

This View of Manhood is Destructive

When a man has his identity in the three Gs, he sets himself up for failure in life. He is intimidated by fellow men who are faring better than he is in any of those three Gs.

The girls he uses as sexual trophies will eventually lose their sexual beauty. And if he lives for this, he may end up making foolish decisions that involve him getting disease and having a horrible marriage as he pursues the latest big bust in town.

Look to God, the Value Giver

Every source of value that does not stem from God is a thief or a poor imitator. A majority of our countries’ constitutional values stem from the Ten Commandments. The moral stand of activists stems from our God-given conscience (Romans 2:14-15). Only a higher being with a higher power allows anyone to have the moral right to say that some things are wrong and some are right. If this moral right to say so comes from one’s convenience and benefit, then right and wrong become relative issues.

Every source of value that does not stem from God is a thief or a poor imitator.

But the man with value-based masculinity knows that absolutes are genuine. That rape is wrong. That murder is wrong. That stealing is wrong. And he does not just uphold the ones that are easy to agree with. He comes down all the way to the ones that the world disagrees with. He stands by these unpopular ones too: that homosexuality is wrong; that any kind of sexual activity outside the marriage institution is wrong; and that sensual thoughts are wrong. He has no grey areas.

Learn and Live Out Your God-Given Value

The path to value-based masculinity is to look at the bigger man, Jesus Christ.

The path to value-based masculinity is to look at the bigger man, Jesus Christ. The man who created all the girls in the world and yet honours each of them. The man who owns the universe and yet chooses a life of a local peasant to save your soul. “For you know the grace of our Lord Jesus Christ, that though he was rich, yet for your sake he became poor, so that you through his poverty might become rich” (2 Corinthians 8:9). The man with all the glory in all of history yet he gives it up on the cross just to justify you and glorify you. Submit to this man. Submit to the big G and the three Gs will make sense.

Ernest and Waturi Wamboye are a dynamic and engaging couple happily married with two daughters. They write and speak on Christian dating and marriage. They are the founders of The Relationship Centre Ltd, an organisation that aims to promote biblical family values in contemporary urban communities in Kenya. The Wamboyes also run various ministries including: Boy Meets Girl, a quarterly relationships forum to help young people marry well; Powerhouse, a men’s pornography addiction recovery program; and Dating Clinic, a couples’ premarital and post-marital forum.

Oasis International is a ministry devoted to growing discipleship by publishing African voices. They engage Africa’s most influential, most relevant, and best communicators for the sake of the gospel; cultivate local and global partnerships in order to publish and distribute high-quality books and Bibles; and create contextual content that meets the specific needs of Africa which has the power to transform individuals and societies, and gives the church in Africa a global voice. Oasis publishes authentically African content that can be trusted. Visit their website to find out more.

5 The Curse of Ham: Getting It Horribly Wrong

Marriage is the God-given context for sex, but it isn’t the solution to sexual temptation or sins. For that you need God’s grace, not a spouse.

Christ Saves Us From The Power Of Sin