The late Dr Tokunboh Adeyemo was a renowned Evangelical leader and scholar. Listening to his voice with regards to African affairs is worthwhile. In 1997 Adeyemo wrote a book titled: Is Africa Cursed? A Vision For The Radical Transformation Of An Ailing Continent. This book was written to respond to claims that as a continent Africa is cursed. Adeyemo argues that Africa is blessed rather than cursed, offering a hopeful message as well as sober message for Africans.

Thinking that Africa’s problem is only spiritual while ignoring the socio-economic aspect is a grievous mistake.

Adeyemo’s work is very important. On the one hand, he readily highlights the bleak predicaments that most Africans face. But, on on the other hand, he offers sober and biblical hope. Thus Adeyemo addresses Africa’s problems in terms of their spiritual and socio-economic aspects. He argues that because in Africa these problems are blended, they must be addressed holistically. Thinking that Africa’s problem is only spiritual while ignoring the socio-economic aspect is a grievous mistake that many African Christian leaders make. 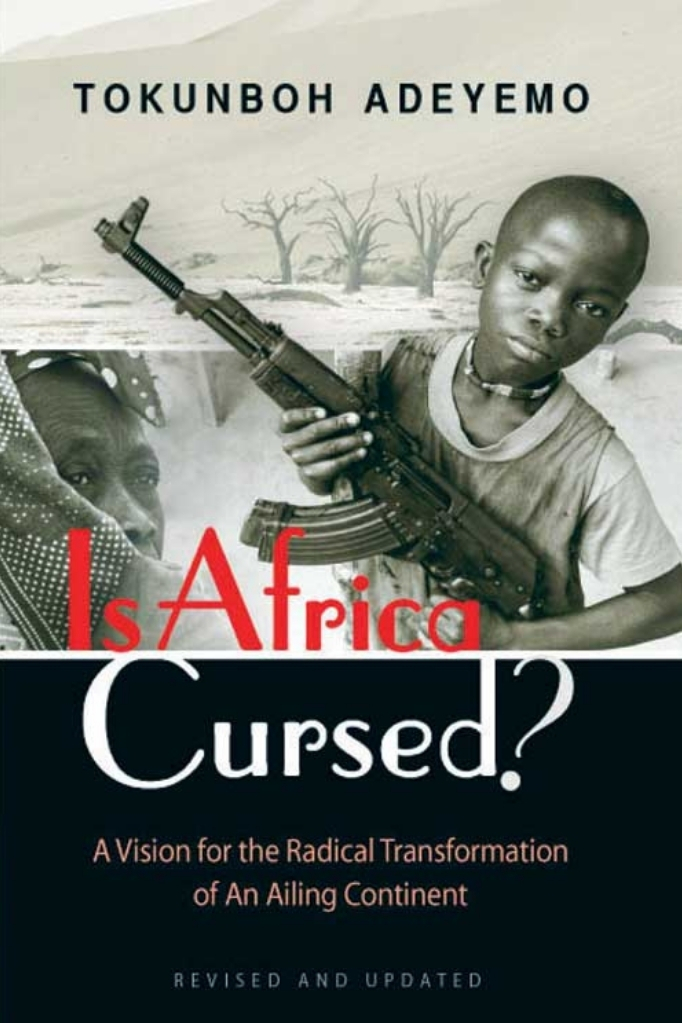 Africa’s story is heartrending. It is the sad account of the long history of a people who have suffered from slavery and colonialism, and continue to suffer wars, genocide, poor governance, starvation, poverty, HIV and AIDS, coups and counter-coups, and child trafficking, to mention only a few. This gloomy picture begs the question, “Is Africa cursed?” In this book, the author conveys a winning message — one of hope for Africa. He unwraps Africa’s place in the Bible, wards off superstition, and advocates for Christians’ active engagement in transforming Africa.

In this review I will highlight Adeyemo’s key ideas and draw a few lessons we should learn from them. The book is structured in two main parts, namely: “Hope for Africa”, and “Beyond Service to Action”.

Adeyemo starts his book by underlining how racism has conditioned us to ignore the image of God in one another. Because of racism, many non-Africans (and some Africans) have a negative view of Africa. He says, “The image that non-Africans seem to have about Africa and Africans is negative, and sometimes the image we too have about ourselves—including Christians—is equally negative” (p2). Of course, most of us are tragically familiar with the Western perception of Africa as the ‘dark continent’, primitive people living in jungles among wild animals.

Many Africans played key roles in the spiritual and socio-development of humanity.

Africa has been a significant continent in history, not only theologically. We have a vast heritage. Many Africans played key roles in the spiritual and socio-development of humanity. With this in mind, Adeyemo moves to the central question of his book, Is Africa Cursed?

In answering that question he outlines two major problems in the continent today: poverty and tribalism. But Adeyemo doesn’t believe these problems indicate that Africa is poor. Instead he points out that Africa is filled with multiple blessings: (1) natural resources, (2) mineral resources, (3) energy resources, (4) human resources, and (5) spiritual blessings. The last of those is evident in the current growth of African Christianity along with increasing global engagements spearheaded by Christian leaders.

However, he says that greater blessing is available for Africa. But only if Africa does the following.

As the failure to obey God brought curse on Adam and Eve (see Genesis 3), disobedience to God will keep Africa wallowing in different types of atrocities. In order to experience God’s blessing and make significant progress, Africa needs to obey God.

2. Worship Of The One True God

True worship of God occurs when God owns the worshipper. When the worshipper has no other god but God. Adeyemo decries the fact that many African churches accommodate idolatrous worship of other gods. He writes, “Traditional pagan religions are thriving today in Africa, and libations and sacrifices are being offered to demons. There are many African leaders who seek help from the ancestors in times of crisis” (p35). In order to progress, African Christians must shun idolatry and worship God alone.

3. The Need For Hard Work

In Genesis 2:15, God placed man in the garden to work. Adeyemo encourages Africans not to be job-seekers but workers. He regrets the fact that “most Africans seem to carry a carefree attitude towards work, characterised by lateness, untidiness, and a lack of commitment” (p38). He concludes this point by saying, “Africa must recover the spirit of diligence and hard work” (p39)

4. Towards A Generous Continent

Adeyemo also encourages Africans to be givers. Giving is a biblical principle (Luke 6:38). Thus it needs to be practiced in Africa. If Africa learns to give, it will be blessed because, “It is more blessed to give than to receive” (Acts 20:35).

Giving is a biblical principle… Thus it needs to be practiced in Africa.

Adeyemo concludes this part by highlighting how Africa is positively portrayed in the Bible compared to many other nations. For example, when in need, Jesus was comforted by an African (Matthew 27:32), while a Roman condemned him (Matthew 27:15-24) and the Jewish nation crucified him (Matthew 27:25-31).

Beyond Service to Action

In the second major section of Is Africa Cursed?, Adeyemo discusses the role of the African Church in society and its relationship with the state. He call the Church to be the “light” and the “salt,” as Christ did (Matthew 5:14). He says this section “is intended to encourage and challenge Christians to influence, and get involved in, the decision-making and management of their nations by being involved in the government” (xii).

The Church has a responsibility in society.

The Church, which is the community of the believers, has a responsibility in society. This responsibility is built upon the very reason for which Jesus came: to proclaim, to heal, and to liberate (Luke 4:18-19). In John’s Gospel, Jesus declares to his disciples that he came to reveal God’s name to them (John 17:6, 26), disciple them (John 17:8-18), and equip as well as setting them apart (John 17:19).

What Should The Church Do?

From the passages above, Adeyemo argues that the social responsibilities of the Church are:

Some God-Given Tools For The Task

The Church is guaranteed success in its ministry through three God-given tools. The first of these is the Holy Spirit, who empowers the Church for extraordinary works. The Holy Spirit heals, reveals the things of God, and fills Christians to do God’s will.

The second tool is the word of God which sets the standard of our living and equips us in our fight against evil. The word of God is like a sword in the hand of the Church to defeat the enemy (Ephesians 6:17).

Church history encourages us to stand strong and to serve God with courage.

The third tool is the legacy of the godly people we read about in the Bible and Church history (for example, Hebrews 11). These people served God. They stood in the face of problems and exhibited faith despite the harsh conditions. Their stories encourage us to stand strong and to serve God with courage.

How Should Church & State Relate?

Adeyemo admits that there is a struggle between the Church and state in Africa. However, he shows how historically the Church has been instrumental in upgrading the society. Therefore Christians should be involved in politics for the betterment of their communities.

Christians should be involved in politics for the betterment of their communities.

He challenges the idea that politics is a dirty game. He urges Christians to equip themselves as professional politicians and to practice integrity in politics. The Bible does not exclude Christians from being politicians. Nor does it restrict the Church against rebuking and correcting the state.

He ends his book by again urging Christians to be “salt” and “light.” We must influence our communities through obedience to God and by loving our neighbours.

Africa Isn’t Cursed, But We Must Act

Adeyemo was inspired to write this book by a preaching series on hope, designed by his pastor. That hope was in relation to the continent of Africa. Adeyemo did not end there. He went ahead to do more research on Africa in relation to hope.

Gripped by God’s gospel we must get involved in the plans of our countries.

Africa has excellent God-given human, natural, mineral, energy, and spiritual resources. But these resources do not automatically make Africa blessed. Africa needs to worship the one true God. Africa needs to embrace and see work as a positive thing. We must shun the evils such tribalism and lack of respect for time. For we will find hope and blessing in obedience to God.

The Christians on this wonderful continent must be light and salt. We need to follow the Lord Jesus and obey his commands, living out what the Bible teaches. But we should not stop there. Gripped by God’s gospel we must get involved in the plans of our countries. God’s blessing for Africa can be realised through the life we live and the works we do.

Dr. David Fugoyo is the Vice Chancellor of Africa Renewal University near Kampala, Uganda, a Christian University equipping leaders to transform church and society. He is a Langham Scholar and a contributor to the Africa Study Bible project. David is passionate about training church leaders, and his vision is “The church that knows her God and the Word of God”. He wants to see this become a reality in his country, South Sudan, and Africa. According to David, this vision can be achieved through sound biblical teaching. He and his wife, Joice, have two daughters

1 Does God Prohibit Polygamy? What About The Patriarchs?

3 Are Dreams and Visions Messages from God? // Africa Study Bible

Belief in the Curse of Ham has fuelled oppression of black African nations for centuries. This grace-reducing misapplication of scripture is horribly wrong.

Pilgrim Politics: A Guide to Political Engagement for Christians

How To Navigate The Crossroad Of Ministry And Money

How Good Is Your God? | Nothing Better Than Jesus