As I was offering Charitable Writing to potential reviewers, more than one of them said that it sounded like a book I should read. I’d like to think they did this because I’m an editor and writer. Thus this book would better equip me for my work. But that’s wishful thinking. The real reason people made this suggestion fits with the authors’ motivation for writing: there is a serious and pressing need for Christians to examine how they “might conceive of and, in turn, practice writing in light of our religious commitments” (p9). Charitable Writing is not a style guide, it is an invitation to consider how the Christian faith shapes our communication, especially writing—beyond its content.

This book is an invitation to consider how our faith shapes communication, especially writing.

The authors, Beitler and Gibson, define “charitable writing” as, “writing that embodies the distinctive Christian understanding of love, which used to go by the name of ‘charity’” (p10). Citing Jesus’ greatest commandment (Matthew 22:37-40), they argue that there is no activity to which this law doesn’t apply. Therefore our writing—as with everything else—must be in its essence an exercise in Christian love (1 Corinthians 13:13). Their contention appears painfully obvious. Until you examine both your own writing and the torrents of Christian content being published or posted online. But we cannot check our faith convictions at the door. So we need, “to reconceive the labour of writing as an aspect of the Christian life, the life of discipleship” (p1).

The means of embracing a distinctly Christian approach to writing—indeed the means to becoming a writer who sincerely loves her readers—is found in the book’s subtitle: Cultivating Virtue Through Our Words. Central to the cultivation of love is imitation and practice. These are two aspects of forming Christian character. So the authors exhort Christian writers to model themselves on examples in the Church, particularly in the past. For it is in others that we observe the Christian virtues. We can then implement them in our own lives, cultivating character through imitation. This process is historically well-attested. For even Paul says, “Be imitators of me, as I am of Christ” (1 Corinthians 11:1). 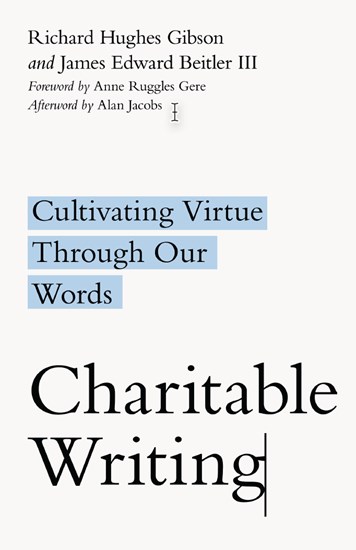 How might we love God and our neighbors through the task of writing? This book offers a vision for expressing one’s faith through writing and for understanding writing itself as a spiritual practice that cultivates virtue. Drawing on authors and artists throughout the church’s history, we learn how we might embrace writing as an act of discipleship for today.

‘Charitable Writing’ is a workshop for the heart before it is a manual to hone our writing skills.

However, the authors insist: “The goal of charitable writing isn’t simply to use Christian practices to smooth out wrinkles in the writing process. It’s to turn the writing process into an occasion for spiritual growth” (p18-19). In other words, the purpose of Charitable Writing isn’t merely that our writing would be marked by love, generosity, and grace. No. The authors hope that we’ll become more loving, generous, and gracious—and that this will infuse our writing. Thus Charitable Writing is designed to shape Christian writers rather than merely our writing. This seems like a pedantic distinction. But I appreciated it throughout the book, which is a workshop for the heart before it is a manual to hone our writing skills.

The three major sections of the book together function to provide the picture of a charitable writer. She is someone who listens humbly, argues lovingly, and keeps their time hopefully.

The first of these three main sections calls on writers to listen with humility. This seems like an odd place to start, since writers are creators. But the authors ground the pursuit of charitable writing in the recognition that we are communal beings—whether that is expressed in society broadly or our own private reading. Thus any writing we do is shaped by and derived from our engagement with others. Humble listening is critical for charitable writing because it entails being teachable. “Humility is the virtue that allows us to see not only our finitude and fallenness but also the goods of our communities. It allows us to recognise that we don’t have all the answers” (p33). Crucial to this point is that we don’t listen only so that we can develop ideas. We listen to others because God commands us to (James 1:19).

Humble listening is critical for charitable writing because it entails being teachable.

Importantly then, we don’t only listen so that we can respond. Instead, “Listening…means concentrating on what others say rather than rushing to assert your own take on things. Listening is a significant part of humility’s repertoire” (p48). It is an exercise in humble dependence that opens us up to others, demonstrating that the ego isn’t the impetus behind our writing efforts. The aim isn’t to establish myself as an authority, but to explore truth with the help of others. Too often writing is little more than the proudly and presumptuous self, weighing into others. Learning humility through listening well is an important antidote to this problem, repositioning writers within their much larger context as well as rebuking the prevalence of arrogance and self-assurance. “Humility says no to the sinful self in order to say yes to God” (p34).

Learn How to Argue Lovingly

Linked with the previous section, and the overarching aim of the book—that character formation will lead to charitable writing—the authors contend that “love is a way of life” (p102). In other words, more than being simply a crowning virtue, everything we do must be led by love. This is Paul’s point in 1 Corinthians 13. So as we turn from listening humbly we must write lovingly. Put another way, “We must practice [charity] regularly, and our hope is that over time it will become a stable part of our character” (p100). But can you simultaneously argue with someone and love them?

We have chosen the wrong metaphor for argumentation: war.

Considering the way that much writing is carried out today, one might spy a tension between argument and love. “Isn’t arguing really attacking? Is that kind of self-assertion, in which you put your view forward as superior to others’ really loving?” (p84). Their answer to these questions is that we have chosen the wrong metaphor for argumentation: war. For in modern culture most arguments are combative, as we speak about ‘attacking weaknesses’ and ‘shooting down arguments’ (p88). With war as our preferred metaphor—or conceptual frame—regarding argumentation, it’s no wonder that we struggle to envision or exercise love when we engage with others.

It’s true that Jesus argued, as did Paul and the Old Testament prophets. Yet, “Jesus’ exchanges invite us to explore alternatives to argument as war. His words create openings for others to experience the grace and peace of God and leave absolutely no place for fighting for the sake of it” (p132). If we are to practice charitable writing, learning how to argue from a place of love, we must imitate Christ. But in order to do this we need to stop thinking both that arguing is unloving and that love precludes argumentation. Because Jesus radically loved those he routinely disagreed with, we should learn to do the same. This will only become possible once we abandon the idea of argument as war, embracing better metaphors and emulating our Lord.

I don’t have space to do justice to the third major section of Charitable Writing, in which the authors challenge our modern obsession with efficiency and remind readers—that is, writers—that our processes are formative. Thus the authors explore what the various stages of writing “might look like if the goal is not to crank writing out but to serve up something substantial” (p145). So, very helpfully, Beitler and Gibson provide practical steps for the writing process, from preparation through to revision. In doing so they issue a challenging correction to both procrastination (or laziness) and perfectionism (or pride). Each of these forget that the purpose of writing is to serve others rather than oneself.

The purpose of writing is to serve others rather than oneself.

Finally, the authors remind Christian writers they we are pilgrims—both imperfect and being formed. Therefore “charitable writing won’t be achieved in a semester or a four-year degree program or even a decade. It is nothing less than the work of a writing lifetime” (p164). But character and virtue don’t simply happen, through some kind of literary osmosis. Christian writers must be committed to becoming the kind of writers who cannot but write charitably. So we must bring our faith into conversation with the writing process. The promise contained in such a commitment is not only that our writing will be transformed, but that we will be too. “Draw near to God, charitable writer, and he will draw near to you” (p167).

Graham serves as the written content editor for The Gospel Coalition Africa. He also serves part time in his local church, The Union Chapel. Graham loves the beach and reading, but believes that combining those two things only ends in sunburn and ruined books. You can read his theological musings at Rekindle. He and his wife Lynsay-Anne have one son, Teddy.

Belief in the Curse of Ham has fuelled oppression of black African nations for centuries. This grace-reducing misapplication of scripture is horribly wrong.

Christ Saves Us From The Power Of Sin