Even a glance at the latest headlines in world news reveals that the world around us looks very different to the way it did 50, 20, or even 10 years ago. The society that our grandparents—even parents—grew up in feels increasingly far away. The rise of identity politics has significantly changed the shape of public life and discourse. Many of these changes would have been unimaginable to previous generations. As the title of Carl Trueman’s book suggests, we are living in a strange new world. Though many of the more radical changes haven’t yet landed on African shores, they’re certainly coming.

From preferred pronouns, notions of gender fluidity, and the future of public restrooms as well as school bathrooms, there are various indicators that a new age has dawned. These shifts have not left Christians unaffected. In fact, most Christians aren’t even sure where to begin conversations. For, as one modern mantra goes, ‘what is true for you might not be true for me.’ So we have many questions. How do we go into this new world and make disciples? Is meaningful engagement and dialogue possible? More broadly, what is going on in the world?

In his new book, Strange New World, Carl Trueman attempts to help readers make sense of the world around us. Foundational to his work is his survey of significant thinkers, writers, and figures from the last 200 years. Their various contributions, Trueman contends, have considerably influenced and shaped the society we live in today. And by better understanding how society has arrived at this point, the Church may be able to better engage the surrounding culture. For African readers, Trueman’s book can actually function as a critical preparation for the inevitable questions, necessary engagement, and cultural shifts. 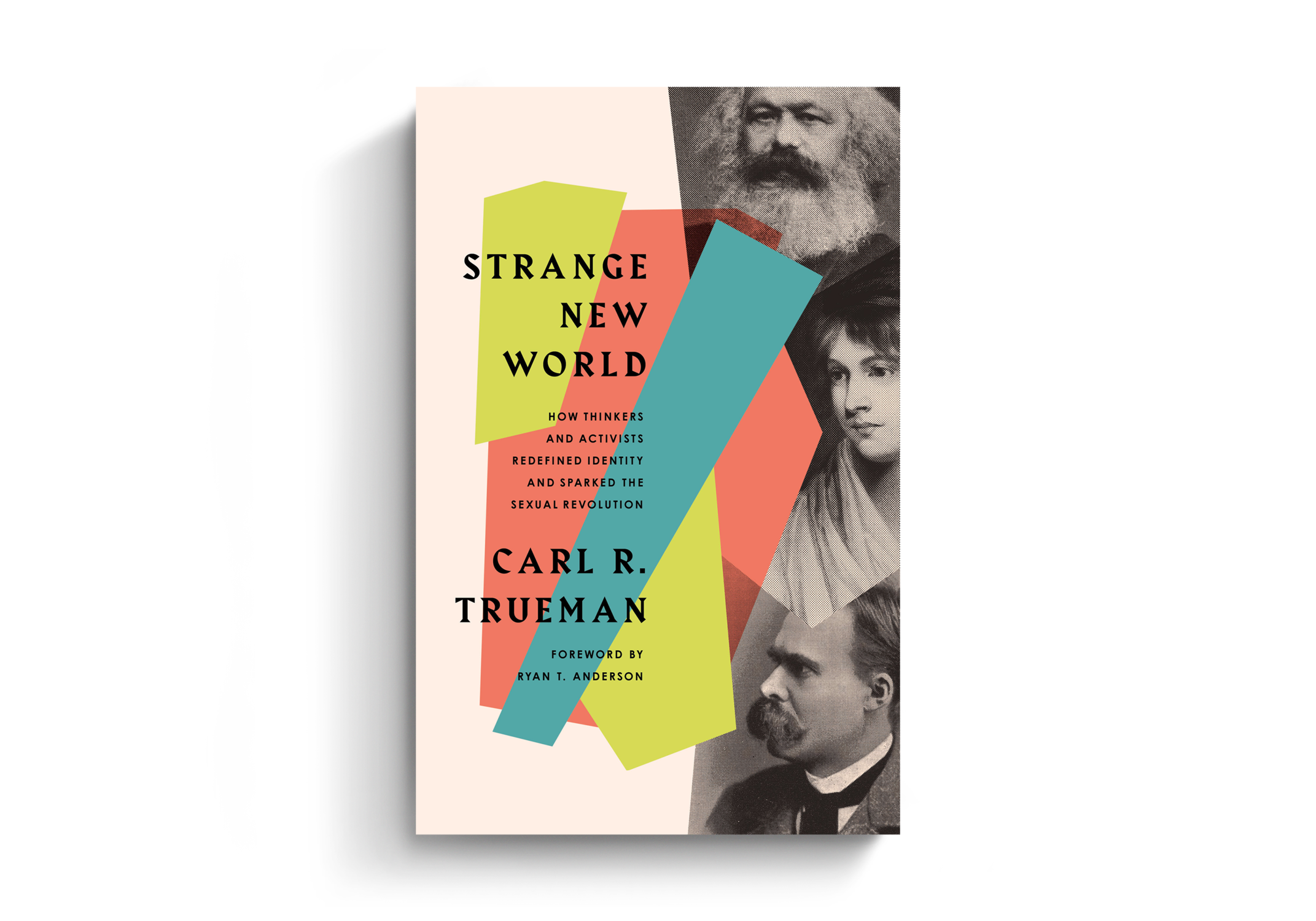 How did the world arrive at its current, disorienting state of identity politics, and how should the church respond? Historian Carl R. Trueman shows how influences ranging from traditional institutions to technology and pornography moved modern culture toward an era of “expressive individualism.”

For fans of Trueman’s The Rise and Triumph of the Modern Self, Strange New World offers a more concise presentation and application of some of the most critical topics of our day.

Probably one of the primary reasons we struggle to understand the world around us is because of a remarkable shift in framework and worldview. These guide how we think about ourselves and the world. Thus one of the most important ideas Trueman treats is the new framework, termed: “expressive individualism.” This is the notion that in order for me to live an authentic, happy, and fulfilled life, I must be permitted to outwardly express my inner self and its desires.

We are living in an age of authenticity, self-expression, and sexual fulfilment.

But it’s not enough that I’m able to express those inner feelings. No. Society must both accept and affirm them. Thus human identity is now inseparable from the individual’s feelings and desires. We are living in an age of authenticity, self-expression, and sexual fulfilment. Personal happiness hangs on these things. It is now radically individualised.

This all seems to have happened very suddenly. However, Trueman traces these trends to historical developments over the past two centuries. Though this new, normative framework has its origins in cultural and philosophical trends. Strange New World is therefore an invaluable exploration of the factors that brought us here.

How Did We Arrive At This Strange New World?

1. The Call To: “Be Your Authentic Self”

In the first few chapters, Trueman draws on the ideas of philosophers such as Descartes and Rousseau, together with the Romantics. He argues that these thinkers, and the broader Romantic movement, gave authority to the individual’s inner voice or feelings. Thus, when Bruce Jenner decided to give voice to the inner desire that he was truly a woman, the world saluted him for the courage and boldness to be who she truly is. Thus our day and age has made inner desires the highest authority. The result is that “authenticity has become a dominant theme in attitudes to what constitutes personal integrity” (p47).

2. Morality Is Resigned To The “You Do You” Mentality

In addition to the above, we’ve redefined the very notion of morality. This is an implication of both Karl Marx and Friedrich Nietzsche’s ideologies. Thus, Trueman writes, “Morality, if it features at all, is something that is contextually determined” (p70). Individuals can live their lives as they choose. Everyone must do what they think is best for them. Thus, in the face of moral conundrums, our society’s response is not to challenge morality. Instead, it loudly proclaims: ‘You do you!’

Within expressive individualism everyone must do what they think is best for them.

But, more than this, these ideas become political. Thus, “[Marx’s] claim that human social relations are at root economic relations leads to the conclusion that all things are therefore political” (p68). Thus, the choice of a Christian baker not to bake a cake for a homosexual couple’s wedding is no longer a matter of personal choice. Rather it is the subject of public opinion. However, these matters have not only become politicised. The very nature of the individual is now decidedly sexualised.

3. The Conflation Of Sexuality And Identity

With the introduction of Sigmund Freud’s thought, as well as William Reich, the nature of identity took on a decidedly sexual character. Therefore, “sex is no longer a matter of behaviour, of what we do; it is a matter of who we are” (p88). Within this new reality, the terms ‘gay,’ ‘straight,’ and ‘lesbian’ are no longer different ways of describing who you find attractive. Rather, they have become ways in which people fundamentally identify themselves.

Since Freud identity has taken on a decidedly sexual character.

This movement, from giving authority to the individual’s inner feelings, to the politicising of sex and sexualising of the self, has been further enforced by technology. Trueman writes, “The rise of technology feeds the notion that we can bend nature to our will” (p109). Thus, with developments such as that of the contraceptive pill and the introduction of pornography, radical sexual revolution seems a natural conclusion. Not only is there a disdain of morality, but a complete rejection of the notion of moral codes or values.

Increasingly, society wants individuals to be free to live as they choose. Everyone must have the freedom to be whoever they want to be—particularly in the bedroom.

What Is The Way Forward?

So what? What does Trueman’s book teach us about the Christian faith? How does it help us to be salt and light in this world? Trueman turns to these questions in his final chapter. For one of the aims for Strange New World is to equip believers. So that we might not only effectively but appropriately engage with the culture.

Firstly, and perhaps most importantly, any engagement with our culture must be marked by repentance and humility. For there are many ways in which we too have compromised the gospel, being unaware of the frameworks we’ve adopted. This self-awareness should drive us all to greater compassion and humility when walking alongside, engaging, and ministering to the world. Self-reflection of our own complicity should drive us to a cross-shaped, gracious engagement.

Any engagement with our culture must be marked by repentance and humility.

Following this, Trueman argues that our strongest identities as individuals are shaped by the communities we belong to. This can be seen in the strength and support offered in the LGBTQ+ communities. Indeed, this was a huge factor in the movement gaining so much traction. Thus, “the church needs to be the strongest community to which we each belong” (p175). For doesn’t Jesus teach us that it is by our love for one another—by genuine Christian community—that the world will recognise us as his disciples (John 13:35)?

As believers we should steer clear of the culture wars. Instead, we should protest against culture by embodying “a true vision of what it means to be a human being made in the image of God” (p176). Finally, Trueman writes that it is through standing on the solid foundation of God’s word and the rich doctrines it teaches that we are able to stand firm, while powerfully engaging the world.

Not only is Carl Trueman an impeccable writer, but his work is an essential read for any believer wrestling through the challenges and questions of our day. Strange New World provides much needed clarity in a time of great confusion.

Trueman provides much needed clarity in a time of great confusion.

This work opens our eyes to the realities of our age. For this is indeed a strange new world. But it is also a book that offers hope. For even though this world is not as it should be, even in the chaos that lies around us, Christians can hold onto the hope of our Lord Jesus Christ. As we do, we are to equip ourselves with the unchanging and unshakable promises of Jesus Christ, so that as we encounter a broken world we can hold out the same gospel to them.

Lara is reading for her Honours degree in theology, at George Whitefield College, Cape Town. She also serves in her local church as a youth leader. Lara is passionate about seeing women trained up and equipped to open God’s Word and teach it faithfully. She has a heart for missions as well as devotional writing, and hopes to combine these two in the future.

4 Why is the Bronze Snake in the Desert Significant?

5 The History of Christianity in Africa // Africa Study Bible

We are called to love the Lord your God with all our heart, soul, mind and strength. Here are 5 ways to engage all your mind and thereby love God more.

Pastor, You’ll Burnout If Your Idea Of Hard Work Is Worldly

What Is Heresy? // Africa Study Bible

How Do You Know You Are A Child Of God?